COMPENSATION OF THE IUE PAYMENT EFFECTIVELY WITH IT

(Until which month can I compensate the IUE)

At what time to compensate?

To know until which month I can compensate the IUE, remember that Article 77 of Law 843 states that the IUE liquidated and paid for annual periods (…) will be considered as payment on account of the IT in each monthly period. For example, if we pay the SUI in the period of April, then we can compensate from the May period, whose declaration is made the first days of June. If we declare in April and pay the tax only in August, we compensate from the month of September that is declared in October.

It can be compensated until its total exhaustion, at which time it must be paid without any deduction.

Article 7 of Supreme Decree No. 21532 determines that only taxpayers of the IUE who have actually paid said tax may deduct it as payment on account of the IT.

Until which month can I compensate the IUE

Article 77, fifth paragraph of Law 843 provides that in the event of a new expiration of the presentation of the affidavit of the SUI, there is an unpaid balance corresponding to the previous annual management, it shall be consolidated in favor of the Treasury. ”

What this article tells us is that the compensation can reach several periods (months) until the next maturity of the SUI as a limit (April of the following year, for example, if you close in December as a commercial company).

What happens if I have not compensated everything?

The answer is in the same previous article. Apart from that, the sixth paragraph of article 77 of Law 843 indicates: “the balances of the SUI that, for any other reason, are not compensated with the IT, in no case will they be entitled to refund or refund, being consolidated in favor of the treasury” .

What if I compensated in the same month that I paid the IUE?

If a company has compensated the IUE of a certain management with the IT in the same period that it canceled (for example, May), and it must have been the following month (June) what it must do is rectify and pay the IT.

This is consistent with the R.A. No. 05-0041-99 numerals 20, 22 regulates the compensation of the IUE with the IT, establishing that the “IT corresponding to the month following and after the month in which the IUE was settled” may be deducted with the amount actually paid by the IUE.

It means that it can also be compensated in another month that is not following the payment of the SUI but a subsequent one.

“In the event that the accreditation of the SUI as payment on account of the IT, has been made from an undue fiscal period, the taxpayer must submit corrected affidavits and pay the resulting IT.” This refers to, for example, if compensation began in the same month that the IUE was declared and not in subsequent ones.

The sixth paragraph of article 77 of Law 843 indicates: “the balances of the SUI that, for any other reason, are not compensated with the IT, in no case will they be entitled to refund or refund, being consolidated in favor of the Treasury.”

1.-It is only possible to compensate the tax actually paid.

2.-Compensation is possible from the month following the settled period.

3.- The Transaction Tax is compensable until the last month of the next payment management.

4.- It is not possible to compensate the tax after the end of the respective management.

5.- The compensation does not support updating.

6.- If at the end of the fiscal period there is a balance this does not remain for the taxpayer but is consolidated for the treasury.

7.- If you compensate by mistake for a period that was not compensable, you must present your amendment

8.- If you pay by mistake a period you can request the return or refund of the balance erroneously paid until before the end of management otherwise you lose it.

Below is a link where you can see a case of Tax Optimization with our suggested solution. 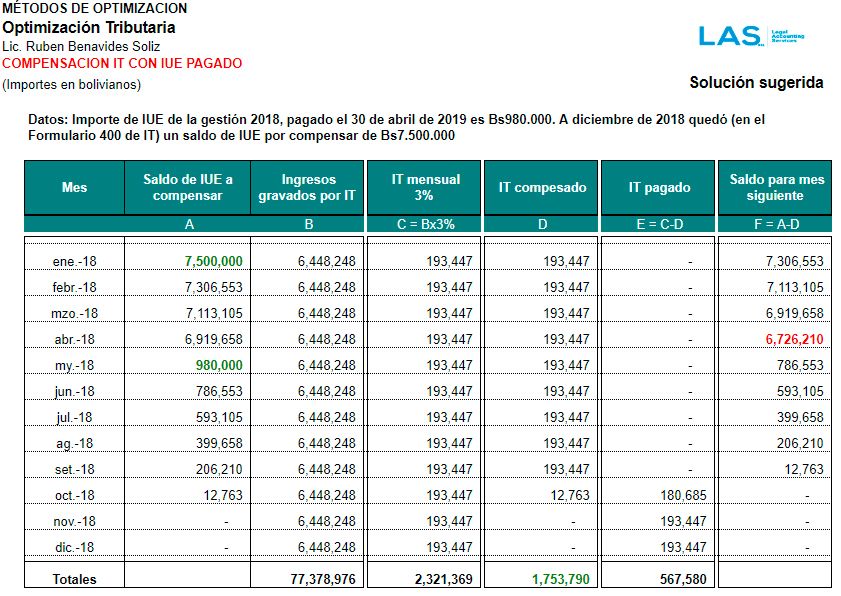