On this occasion we are pleased to present one of the many tax processes filed by our Firm, in the case of tax prescription for affidavits made by the taxpayer that were not canceled.

Below we briefly narrate the event of the events: 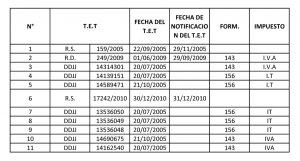 The tax debt for Sworn Declarations declares and not paid corresponding to the Value Added Tax (VAT) and Transaction Taxes (IT) of the procedures, 2004, 2005 and 2006 updated to the present value in accordance with Article 47 of Law No 2492 CTB amounted to the sum of:

Obtaining the declaration of the Partial Prescription, the amount equivalent to:

This is how the present process is a successful case, in which we managed to reduce considerably the tax debt for the benefit of our client, product of a good technical and legal tax defense, which guarantees our quality of service and prestige as tax specialists.